On 15th of May 2016 Shatta Wale in collaboration with Sanni Adams released one of the most controversial song WMT which virtually means WO MAME TWE in Akan dialect .This particular song attracted heavily criticism from the public which includes The President of MUSICA Bice Osei Kuffour and some government officials.
This song became one of the  debatable songs in which several opinions were sorted everywhere.
Media Topics,Newspaper headlines and Radio and Tv discussions were all flooded with this song and this made the song very popular in which it nearly faced ban on both radio and tv due to its profanities.
Shatta Movements act Sanni Adams who was part of this song on 12th November 2016  has publicly opened exoneration on this  Shatta Wale’ WMT song in which he nondiscriminatory incriminated Ghanaians for their hypocritical mindtrip on that particular song.
The fast-rising singer  who shot to fame with WMT song made this verbalization when he appeared on Amsterdam base  HI-RADIO with Nana B the host of the day.
He argued that Shatta Wale’s WMT song is one of the incomparable tunes in the history of Ghanaian Music and he sees nothing wrong with the track .
Sanni Adams who was on the same track with  Shatta Wale also said “Ghanaians should have rather appreciated the good work the two brought out instead of pounding heavy criticism on it.”
He revealed to the host(Nana B) of the day that, the rational behind the track was that, Shatta Wale as his Godfather in the music industry offered him the singing role in the track(WMT) just  to peel or unmask him to the climax. And the other idea was also for  him to get  access to the Big Brother house but bad fortune fell on his side and he was not select due to his affiliation to SM community.
Somewhere in the hot interview Nana B the host of the day seek his opinion on the continues deaths of our celebrities and the industry players particularly about Vybrant Faya death and Sanni Adams made it clear to the public that Overuse of Stardom is what he can say about  motor accident killing our celebrities in Ghana.
Sanni Adams who is very versatile and does all kind of music in Ghana has these track in his discography Taskwa no as3ti, *wo maami tw3*,gbelemo
Source : Hi Radio Amsterdam
Written: By Dj Komfa
www.ghanadjs.org 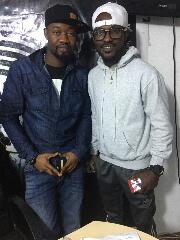