BANJU-I IS TO RELEASE A NEW SONG TITLED #ASHAIMAN

BANJU-I IS TO RELEASE A NEW SONG TITLED #ASHAIMAN
As the dancehall kingdom is becoming an atmosphere of dexterity and inventiveness, ,JUDE BANI popularly known by his stage name as Banju-I,  the Ghetto Swagger hit maker is rolling back to the dancehall territory with mind blowing and stupendous dancehall ditty.
With his temperamental
peculiarity of singing ,He has painted the mind of his fans both local and international with his dancehall druthers or trend.
Banju-i has not delimitate himself only with dancehall music but practice a managerial role as  the C.E.O of Ghetto Swag Alliance (GSA).
When asked Banju-I how best he can describe himself to the general public he responded by saying “Yeah i see myself portraying the  real definition of dancehall in Ghana”.
Among his works He has released so far,He mentioned few like Ghetto Swagger,Red eye,Run Dem Out, Tulaku etc.
Banju-I was among contestants who participated in the Peoples Choice Competition and  he was finally  crowned as the Winner with the likes of Buda Man, Sean Taylor etc.It is  the same Competition that paved the way for him to be exposed to a phantom  Opportunity to perform at Samini Movado Show at Accra Sports Stadium in the year 2011
He had a Marvelous Performance with Great dancehall Superstar’s like Movado,  Samini, Iwan  and many on the same bill,which took place in ACCRA  Ghana
Banju-I is yet to release a mind blowing song Titled Ashaiman.
This time around he displays his talent in a unique way by selling Ashaiman community to the world in a very nice way  which will over take in the history of dancehall worldwide.
He is telling his fans to keep their fingers crossed and wait for his new tune to be dropped 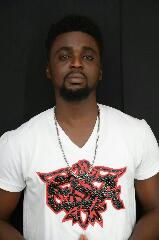